What Is Vine & Why Should I Care? - Uses of Vine For Business

We are living in the On-Demand world.  We all have so much at our fingertips, that we expect everything now.  A lot can happen in a very short amount of time.  Say, in 6 seconds.  A legendary high five, texting a friend, reading an email…But can you create a lasting impression in 6 seconds?  Twitter and many early-adopter, creative marketers think so and have already begun using vine for business.

Vine is a mobile app that was founded by Dom Hofmann and Rus Yusupov in June 2012 and purchased by Twitter in October of 2012.  According to wikipedia, debuted on 24 January 2013[ as a free iOS app.    Vine enables users to create and share short videos with a maximum length of 6 seconds, which compliments the 140 character limit concision that is Twitter.  The app allows you to start and stop filming so quickly that you can create stop-motion-effect videos.  And because the videos play in a loop, you can create an animated GIF-like video that opens the door to creativity.

According to Vine’s blog:

“Posts on Vine are about abbreviation — the shortened form of something larger. They’re little windows into the people, settings, ideas and objects that make up your life. They’re quirky, and we think that’s part of what makes them so special.”

A 6 second video definitely caters to our diminishing attention spans.  Just about anyone can pay attention for 6 seconds, but are you as a business owner or marketer prepared to tell a compelling story in that short span?

We have gathered 15 lessons on using Vine for Business.  Here are some of our favorite “attention getters” and what is so compelling about their 6 seconds.

1.  User Generated Content – Ask customers to submit Vine videos of themselves using your product, and perhaps even compile the best into a longer-form ad used on another platform.

The Cavendish Hotel in London @cavendish_hotel did just that for Valentine’s Day and created a contest for it’s fans. 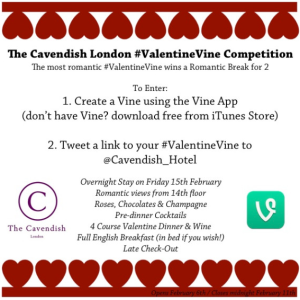 Cadbury Chocolate @CadburyUK achieved this too.  Sometimes it can hard to get people excited about your contests, because if the “fans” you’re promoting to aren’t already customers, they may not know enough about your product to know they want it.  Cadbury grabbed everyone’s sweet tooth by using Vine to show off their new confectionery creation and then invited fans to win a sample.

Check out our #EggNSpoon Unboxing Vine then retweet for a chance to win a box of both flavours by Tuesday’s end: vine.co/v/b1ej2K29Q0u

2.  Engage Customers With Creative Specials – Mendmark, whose goal is to communicate the message of love through the sale of products that serve as visual reminders of the greatest lover in history, are celebrating the launch of their new spring line by announcing a one week 35% OFF sale…with a twist.  They hid a discount code creatively in a 6 second vine video.

To celebrate our new Spring line I hid a 6 letter coupon code in this vine for 35% off any @mendmark order. vine.co/v/bpmbITXv1EH

3.  Educate – Whenever you have the opportunity to educate your audience with something fascinating, you should.  The San Francisco Zoo @sfzoo stirves to get new visitors by exhibiting their amazing residents through educational Vine videos.

4.  Showcase Your Brand’s Story – Spend some time thinking about how you can communicate your brand’s history; things that will show that you know you products, services AND customers inside and out.  Gap ‏@Gap did a magnificent job showcasing their brand from their very first pair of jeans all the way through the evolution of denim up to today.

From the past to present, the labels tell the story of our 1969 jeans. #denimevolved vine.co/v/bvP0zgpe9Oa

5.  Find A Creative Way To Engage Your Audience In A Conversation – brandin6 ‏@Brand_in_6 showcases his take on the “Magic 8 Ball” for Starbucks by creating the “Order Assistant.”  With Vine, any user can tap their screen (or in the case below, click on anywhere on the video) to stop the video.  With this creativity, Brandin6 created something to help Starbucks customers play a russian roulette of sorts when they don’t know what to order.  It could even spark a customer to go to a local Strabucks and order something new, so this kind of update is great use of vine for business for engagement and sales too!  What could you come up with for your product or service that could drive similar engagement and sales potential in 6 seconds?

#starbucks order assistant. Not sure what to order?Tap the screen. vine.co/v/bwm7QxO2DZm

6. Celebrate Holidays or Tribute Special Days – You can get into the holiday spirit throughout the year with a little corporate branding.  You could either create a fun holiday video or make marketing related videos that feature your holiday promotions.  Either way, fans that are celebrating these holidays will certainly respond positively.  One of my favorites that I have seen thus far, comes from Khoa @lazybearkhoa.

7.  Bring People Into Your Store – Local businesses can take advantage of Vine for their business by showing their fans how cool it is to be inside their store or restaurant.  Urban Outfitters does a great job of this by using their Twitter account to highlight new products (like this one) as well as events that they are holding in their stores.

8.  Showcase How To Use Your Product Or Service – Short, how-to videos for products that can use either an extra hand in educating the public on how it’s used, or to showcase creative ideas for how to use a product that may not come immediately to mind can be very effective.  In this example, Lee Murrell uses his 6 seconds to highlight one of his favorite recipes from his dessert cookbook.

9.  Promote Your Product or Service On The Heels Of Current Events – Pop culture and media are at an all time high.  People seem to have exposure to everything and know all about what’s going on.  Use this as an opportunity to creatively exploit your product or service around those times.  In preperation for Super Bowl 2013, Malibu Rum made their own play using some of America’s favorite game day snacks, as well as promoting their star players Malibu and Malibu Black! Who wouldn’t want to spend the Super Bowl with their favorite drink and snack?

Stocking up for the #BigGame tomorrow? Here’s how to get it done – #Malibu style. #vinevine.co/v/b11uhXlFKb1

10.  Behind The Scenes Glimpses – Finding a way to get your fans engaged in your brand is more than just about promoting your products and services.  Give them a little glimpse of what’s happens behind the scenes.  Many brands already have different versions of the same video ad for different formats (such as a shortened pre-roll ad for Internet video edited from a longer-form TV ad). Vine can further complement this by making snippets of behind-the-scenes footage available where appropriate.  Some of the more prolific “viners” are sports teams.  Some of the videos may be a little mundane to those who aren’t interested in sports, but it gives a glimpse behind the scenes.  Here the Los Angeles Lakers, who update their account with amazing regularity and have over 3 million followers on twitter, use Vine to show things fans usually don’t get to see.

11.  Offer Up Relevant Fun Facts -Not everything has to be about business. General Electric shares some historical trivia related to their industry that their fans might find interesting.  General Electric took the opportunity to reach out for early interest in science and it’s magical.  You can also take the opportunity to get some engagement from your audience and post a trivia question first, then answer it with a Vine video.

12.  Highlight Advocates For Your Brand – What’s even better than advertising one of your products on a Vine video? Have one of your fans do it for you.  GoPro highlights a fan’s Vine video made with his GoPro camera. This is a great example of how businesses can get their customers to market their product by encouraging them to create great Vine videos.  We recommend creating and attaching them to a branded hashtag.

13.  Display The Work You’ve Done For A Client – You can get creative and not just have a static portfolio on your website.  This is a great example of how even small businesses can take full advantage of Vine.  Create an animated portfolio on social media like OneNine Design has done in this video displaying the packaging they created for a client.

14.  Get People Excited About A New Product Launch – Sometimes visual inspiration can really get people excited about a new product you have in the works.  Businesses can show products outright or use Vine videos as teasers to get their audience excited about what’s coming up next. Or better yet, this could make for another great contest where one person who retweets the Vine teaser or product preview wins the product!  Rolling Stone Magazine uses this every month to give a preview of who’s on next month’s Cover.

Guess who is on the cover vine.co/v/bv2zFHt93gZ

Nintendo uses Vine to give fans a preview of their upcoming video game package.

15.  Bring People In To Your Office – Businesses and brands have the ability to humanize themselves on social media, and what better way to do that than by taking people inside your office?  {Warning – shameful plug coming} The Xcite Group does this in a Vine video showing off our newly hand-painted logo on our office wall.  (Thanks Felicia!)

A video of your office can not just show how much fun your employees have on their downtime, it shows that employees are happy to be a part of the team.

Also for local businesses, one of the biggest advantages of Vine over other video platforms—most notably YouTube—is that it more easily adds geo location data to posts and is easy to share.  This can get real interesting for local restaurants or other vendors looking to Vine as a way to draw in customers in the immediate vicinity… something to keep in mind when creating a Vine video.

Our new logo on the wall! vine.co/v/bHhFBA6tmzT

Why Should I Care?

There are sure to be other examples and lessons as Vine matures as a platform over time.  It is, for all practical purposes, still an infant, but with more than 500 million registered Twitter users, any experiment is sure to generate useful data for informing future best practices.

There have been many other companies attempting apps for video sharing in the recent past.  Vine has solved two of the biggest problems that stopped other video apps from achieving mainstream success: accessibility and community. Vine makes the video creation process as intuitive as possible — sacrificing a bit of flexibility and flair in the process — and it was able to scale up its community of users quickly thanks to the power of Twitter, both of which make it an attractive app for users. But there is a third obstacle Vine has yet to completely overcome: stickiness.  If the Vine community doesn’t share worthwhile videos on a regular basis, then there’s less incentive for Vine users to make a habit of checking the app on a regular basis.

So should you care?  In my opinion, the short answer is yes.  It is definitely a new, creative, simple way to engage your audience, but whether or not Vine will be “sticky” and be around a while remains to be seen.  Also, Vine should NOT be your only foray into the world of video marketing. (something that should be a big priority for all businesses in 2013, big or small)

If you would like help with Vine creativity or any other questions regarding marketing your business online, please use our contact form on the left of this article and we will gladly set up a time to speak with you.