In doing my best to digest everything I can find out about Google’s three and a half hour keynote yesterday, I can say that Google could possibly be the world’s most powerful company.  Having not been at the event in person, I’ve used first hand reports, watched some of the live stream here (https://developers.google.com/events/io/) and read as much as possible from sites like Wired and Mashable.  If you missed anything or are interested in watching all three and a half hours, you can see it here:  http://www.youtube.com/watch?v=9pmPa_KxsAM

What seems to be pretty clear is that Google didn’t announce earth shattering products in a bunch of new categories.  There were Google Glass, jumping out of airplane moments, but they were a ton of upgrade announcements.   It was definitely more about the data and technologies that Google has at it’s fingertips and how they are leveraging this data and technologies for a unified set or services and products.  There were big announcements on Search, Maps, Music, Hangouts, Google Now and developer tools and even an incredible speech and question and answer session by co-founder Larry Page.  He talked about the importance of technology and it’s overwhelming ability for it to truly improve people’s lives.

Google has redesigned the Maps experience for both desktop and mobile to make maps smarter and more visually compelling as well as increasingly more personalized.  The new Google Maps draws you a tailored map for every search and click you make. So whatever you’re trying to find or wherever you’re trying to go, you’ll always have a map highlighting the things that matter most.  The entire map is now interactive. Clicking anywhere will focus the map on that location and show you helpful things, like related places and the best ways to get there.  From outer space down to the streets, the new Google Maps gathers all the imagery of a location into one spot, making it easy to explore your world from every angle.  As you search the map, star places you like and leave reviews, the map starts to adapt and can suggest things like restaurants you might enjoy or the quickest way home. In other words, the more you use the new Google Maps, the more helpful it becomes.

The new Google Maps search for places and see them, along with recommendations, directly on the map interface.  For example, you can search for a Sushi restaurant and see which ones your friends like. Click on a restaurant, and a card pops up in the corner with images. From there, you can get a 360-degree view of its interior. Such 3D views are built in throughout the new Maps. When you go to various locations, you’ll see 360-degree photos, indoor or outdoor, uploaded from users.

Google Maps is now more personalized to you.  It lets you highlight specific spots and create landmarks like, say, your favorite coffee shops or where you had your first date.  Click one and it opens a new map with related places to explore.

Navigation directions also got a facelift. Click a spot on a map to route from one place to another, and Google Maps gives you driving, public transit, walking and biking directions. For public transit an easy-to-compare schedule viewer shows you when the next buses and subways are stopping near you, with an overlay of necessary transfers on the map.

But Google Maps isn’t just about finding, seeing and getting to places. It’s also about perspective. The team showed off a zoomed out view of the entire earth from space, making the stars, sun and universe visible. And the clouds you see surrounding the earth: Those are real-time.

You can get a preview of Google Maps here.

The upgraded, redesigned social platform looks like a cross between current G+, Pinterest and maybe a little Facebook thrown in.  It has a new three-column look that gets a lot more information in front of users, but it’s really what’s behind the new information that’s interesting.

Google talked about how Google+ can show you more about whatever is included on your G+ page, even if there is not a description.  They showed a picture of the Eiffel Tower, and literally behind it, because these new “cards” flip over, is more relevant Knowledge Graph-guided information about the landmark.  Google also announced “Related Hashtags” in Google+.  These analyze the contents of any post and  add the hashtags Google thinks you need.  They did say what Google “thinks.”  This intelligence is also evident in Google’s new photo tools.  No one really thinks “Google” when they think of photos or photo editing, but that may change with the smorgasbord of hosting, sharing, and editing features added to Google+ today.  One new edition, Highlight, sifts through your photos and tosses out the crappy ones, because it can do things like recognize if a photo is blurry or has terrible exposure. It also can identify landmarks, search for smiling people in images and ID photos featuring your friends and family. Invasive? Maybe. Useful? Definitely. Perfect for sorting through the morass of photos you accumulate after a vacation.  It is more evidence of what Larry spoke of, “Technology should do the hard work so that people can get on with doing the things that make them happiest in life.”  Lastly, a feature called “Auto-Awesome” identifies those pics in a series and stitches them together for the best possible shot. In other words, it makes an aggregate photo using all the best elements of the pics in the series.  So it “sees” things like similar photos shot in a burst to find all the smiling faces so that it can create one composite where everyone is smiling.   You also can string them together to create an animated GIF.  Awesome can also create HDR shots, or stitch multiple pictures of a landscape into a panorama.

Since Google knows these things could freak some people out, it’s included the ability for anyone to opt out of  these new features. 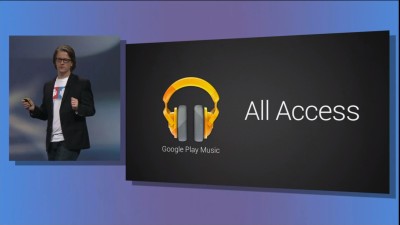 As anticipated, Google released it’s new $9.99 per month streaming music service called All Access.   All Access takes Google’s interwebz smarts and puts it toward finding music you’ll like. You can create personalized radio stations from your favorite songs or artists, a la Pandora, or browse recommendations from Google’s expert music team. You also can explore by genre. Songs are available with a single tap. And if All Access pulls up a ditty you dislike, you can banish it with a swipe.  What really interested me was that Google instantly delivered custom “radio stations” based on your interest.  It’s what Google seems to be doing, using what it knows about the world, you and content to make something new.  For whatever service it wants to create, Google can leverage a enormous amount of highly organized data and bundle it all together to create something ridiculously useful  albeit possibly creepy depending on your perspective.

It’s not just about the data, however.  Mountains and mountains of data are meaningless if you can’t dive deep into that data and see every single critical relationship on the fly.  Google’s incredible work on building out Knowledge Graph is obviously at work in almost everything Google is doing today.

Google’s Voice Search (think Siri, but possibly more intelligent) has already existed on Android phones but is now making the jump to the desktop, via Google’s Chrome browser.  Google Now gives you exactly what you are looking for, as soon as you ask.  And now, you don’t even have to ask.   As Google’s Knowledge Graph-based search continues to get smarter and smarter, surfacing the most useful and relevant results for your queries, Google Now now anticipates information you haven’t even asked for yet. 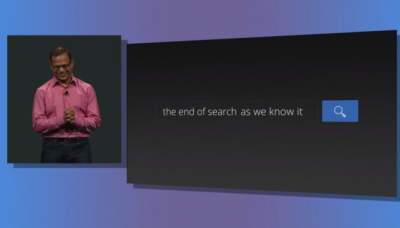 If you search for the population of a country, for example, it’ll pull up that information, along with a graph and stats on how that population compares with other countries it is most often stacked against. This was demonstrated in yesterday’s keynote with a search for India’s population.  And if you opt into a Google Search trial, Google Now gets even smarter. When you search for something, it also searches your email and calendar, so you can search for things like your next trip, or when your next appointment is. You can even compose emails or schedule reminders straight from that search bar.

On top of that, you can search (and get results spoken back to you) on any platform — mobile or web.  Apple can certainly do all these things with Siri, but not necessarily to the same depth as Google. Google simply knows more about you, and if you’ve signed in to Google and Google+, multiply that knowledge by a factor of 10.  So again, the most impressive part of all of the flawless demos yesterday was Google’s data, what it knows about you and then what to do with it.

The almost four hour ordeal was then brought to a close by the appearance and speech of Larry Page, despite his vocal aliments, which he spoke briefly about.  He spoke inspired about Google’s direction and how technology continues to change the world and Google should be affecting us.  Then he embarked on a question and answer session with the audience to end the event.  For me, it was a very human and refreshing way to end an event that is typically laden with formulaic “nerd-speak” and new technologies. 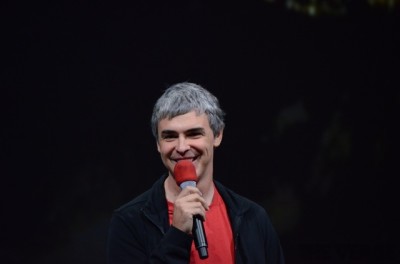 One of the most profound moments for me was when he said “Despite the faster change we have in the industry, we’re still moving slow relative to the opportunities that we have.  And some of that I think is due to the negativity.  You know, every story I read about Google is kind of us versus some other company or some stupid thing and I just don’t find that very interesting.  We should all be building great things that don’t exist, right?  And our being negative is not how we make progress and most important things are not zero sum.  There’s a lot of opportunity out there.  We use technology to make really new and really important things to make people’s lives better.”